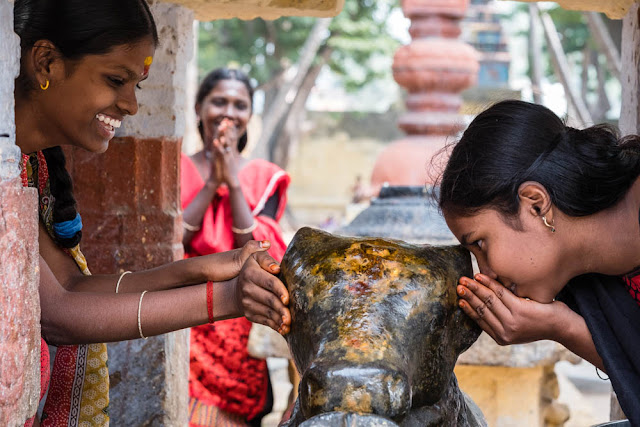 The girls are whispering into the ear of a very powerful bull who apparently has a direct hotline to god.

On Saturday we took all the children of the illam to three heritage villages within the local region.  Villages whose rulers can be traced back to 300BC.  The trip was an opportunity to give them all a glimpse into some of their amazing history, visiting temples that are centuries old. Stone pillars at the entrance to the temples have inscriptions that are over a 1000 years old.  The trip was primarily educational and I hoped it would also prove to be a source of inspiration for their photography.

In the village of Thenkarai, at the entrance to the temple sits a very old statue of the god Nandhi, whose form is that of a bull.

There are so many deities in Hinduism that I'm having trouble remembering them all and what role they play.  What I can glean from my research on Nandhi is that he has a very special status and always sits at the entrance of the temple facing the Lord Shiva.

It all dates back to a time when the goddess Parvati, wife of Lord Shiva, lost her memory, so Shiva and Parvati spent a lot of time meditating in the hope this would aid its return and for a general peaceful wellbeing of course.   Nandhi was a trusted and loyal devotee of Lord Shiva, and so he joined the meditation.   This seemed to Lord Shiva's enemy, Jalandgar as a jolly fine time to abduct Parvati.   Shiva so engrossed in his meditation he didn't notice and no one seemed able to break through his meditative state to inform him of the danger. They hauled in Lord Ganesha (the god who takes elephant form) to try and get the message through to him.  But even he wasn't successful.  However he did notice that the the bull Nandhi had a special relationship with Shiva and was connected to him in the mediation ritual.  So, he whispered in his ear, "hey your wife's been abducted", which had the desired effect of getting Shiva and he then took notice of the events around him just in time, and all ended well.

"Lending an ear" has a whole new meaning here.  If you whisper something in Nandhi's ear you can be assured it will reach Shiva promptly.  Why the other ear is always covered I'm not sure, maybe that is so Parvati or Ganesha don't share your secret.

So what wish were the girls passing on to Shiva yesterday?  I believe they were all asking for a pass in their exams they are currently sitting. 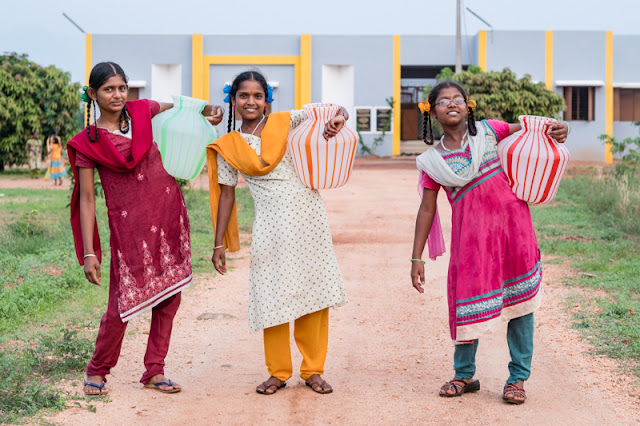